Another busy week, in which I managed to complete three chapters.  I am about three quarters of the way through the first book now, which is not as far as I had hoped I would be, but I imagine a lot further than I would be if I hadn’t started this challenge.  I am going to try switching to solving in the mornings before work, when my brain will hopefully be a little fresher than after.

This chapter is about combinations, and features fairly standard tactics problems.  Some of the exercises took me a while, but I did manage to get almost all right.  The exception was 15-3, where I chose Bxc5, which should still be winning or at least much better for White, but is much less convincing than the (with hindsight rather obvious) solution, Rd8+!

It’s amazing how complex and interesting positions with only four pieces (including kings) left on the board can be!  This chapter is about queen vs pawn (on the 7th), and I found some of the mate/stalemate motifs really pleasing.  The only exercise I dropped points on was 16-4, which with hindsight is laughably simple. 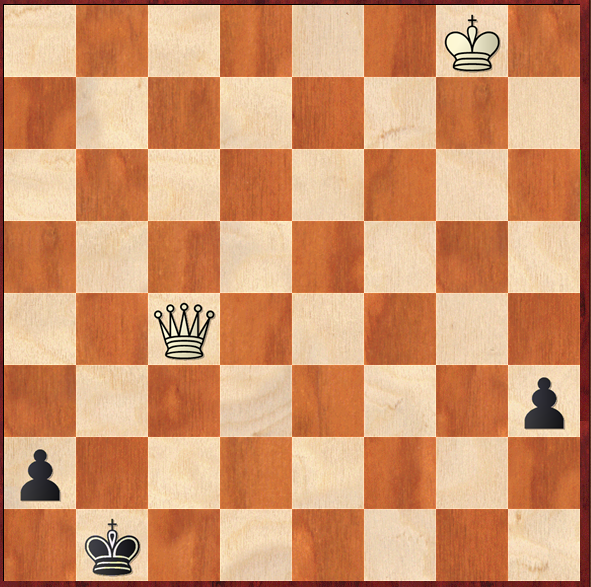 It is White to play and win.  I immediately noticed that after Qb3+ Ka1 White does not have to worry about stalemate straight away, as Black still has his h-pawn.  However, I only thought about using the extra tempi to bring White’s king closer to the a-pawn.  As it is clearly too far away for this plan to work, I gave up and assumed it was a draw.  In fact White mates with the simple 2. Qc2 h2 3. Qc1#

16-8 is a real treat, which I was pleased to solve correctly, but I will leave that position for people who have the book.

This chapter is about stalemate motifs.  As with some of the earlier chapters, the theme is so well defined that it makes finding the solution quite straightforward in most cases, and I managed to get them all right.  The most challenging was 17-2, for good reason – whilst the ‘solution’ given in the book is the best try, it doesn’t actually work with best play!

I ‘found’ Bg4, where the book gives only Nxg4 stalemate.  I wasn’t sure what was going on after Nc6 (or even Bf6, which is still a draw, but worth a try rather than giving immediate stalemate).  It turns out that Black’s knight can dance around and eventually give mate, despite the White bishop’s best efforts to defend the key squares.  Hopefully this will be corrected in a future edition.

Those of you who are doing this challenge with me, let me know how you got on this week in the comments below.