Here is a position from one of my games in the final 4NCL weekend.  White to play and ramp up the pressure.  The solution is given further down. 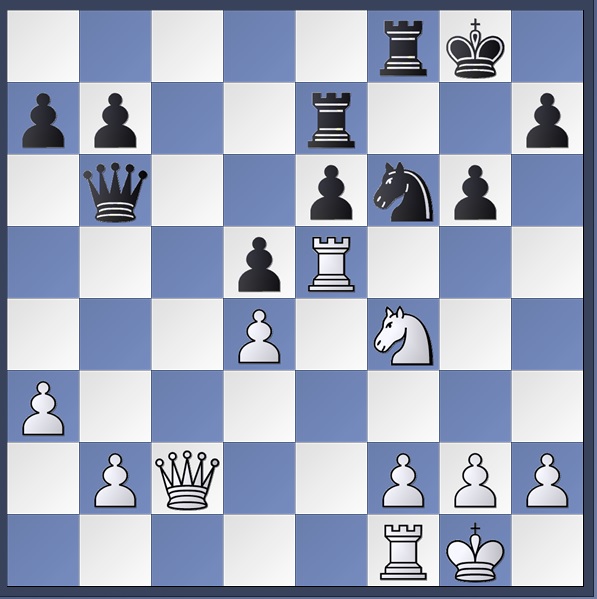 A few disappointing results will see me shed 8 points in the next list.  A steady performance in the Central London Chess Congress gained me 2 points, but I did not play well at the 4NCL.  In the position above, I had played reasonably up to this point, and was looking to increase the pressure on black’s weak e6 pawn.  This can be achieved with the simple Rfe1, when Qxd4 runs into a fork after Nxe6, and Rfe8 allows Nxg6.  I saw both of these points, but strangely thought that Kf7 was holding things together for Black.  I can’t quite remember what was going on in my head at this point, but imagine I noted that Black had e6 adequately defended in terms of number of pieces, without bothering to check what those pieces were.  Of course, after Kf7 I can simply take on e6, emerging up material.  Instead of Rfe1 I complicated matters with Qc5, leading to an interesting rook and knight ending which was eventually drawn.  This was followed by my first and only loss this 4NCL season the following day, after another bad calculation error.  I recovered slightly on the final day by beating an underrated junior, but the damage had already been done.  This will make the uphill climb I face over the next few months even steeper.

Whilst my rating is not yet close to 2100, my performance for this year is getting there.  Over the 14 FIDE-rated games I have played in 2016 my performance is 2068 (sadly down from 2140 before the last 4NCL weekend), and in my 38 ECF-graded games it is 179, which equates to 2080 FIDE.  Combined that is a decent sample size, so I am confident that I am getting stronger.  Even so, another sizeable jump in performance will be required in order to get close to 2100 by September.

I have only hit the 6 hour weekly target in two of the four weeks this period, due to busy weekends.  The weekends have been busy with tournaments, so I have still been doing chess, but I would like to be able to fit at least 6 hours in during the week.  I studied during my lunch break at work today, and am going to see if that is sustainable.

This weekend I am playing in the Frome Congress, in a last ditch effort to qualify for the main section of this year’s British Championship.  In the UK, winning the Open section of a weekend tournament is generally required to qualify for the British, but if the winner has already qualified the qualifying place moves on the next finisher.  This late in the season a lot of people have already qualified, so I am hoping finishing in the top 5 or so (still a big ask) will be sufficient.

As usual, do let me know if you have any thoughts or questions by posting in the ‘Comments’ section below.