As expected, week 3 was a write-off, due to having too many evening matches.  Unfortunately week 4 went the same way, as I was ill at the start and then had to work night shifts later.  Week 5 has been much more productive, with five chapters completed in spite of having two mid-week matches.  That means I am slightly under half a book behind the pace set on the Quality Chess blog, but I may be able to catch up over the coming month.  For those who haven’t seen it, Artur himself has now given his thoughts on the challenge, providing those of us doing it with an extra boost of motivation.

This is another pawn ending chapter, talking about the opposition.  I was expecting to ace the exercises, as a lot of them were similar to those in the first chapter of Dvoretsky’s Endgame Manual, but I carelessly missed a few details, dropping four points.

The topic of this chapter is the pin – a tactic players become familiar with very early on – and unsurprisingly it was fairly straightforward.  I still dropped a couple of points on the last exercise, missing that after my proposed solution of Bxc5 Rxc5 Qd4 Qc7 Qxc7 Qxc7 Qxb4, Black escapes with a perpetual check.

Another chapter on an elementary tactical motif – the double attack.  The exercises were once again fairly easy for me, but I still dropped two points.

The topic of this chapter, ‘Realising a material advantage’, was very interesting for me, as it is something I routinely struggle to do.  Some of the exercises required careful thought, though I eventually managed to solve most of them.  The only exception was 13-6, though I feel a little robbed here, as my solution (Re7) also seems to be winning but is not mentioned in the book.  If anyone knows of more exercises available anywhere on this theme, please let me know in the comments section below.

This chapter deal with open files and ‘outposts’ on them.  ‘Outpost’ in this context seems to mean ‘square on an open file defended by a pawn, and not able to be attacked by an enemy pawn’.  The idea of occupying outposts on open files is not as ingrained in me as some other strategic ideas, so it was a useful read.  I recently failed to make use of just such an outpost in one of my games (Taylor – Jaszkiwskyj, Middlesex vs Essex 2017): 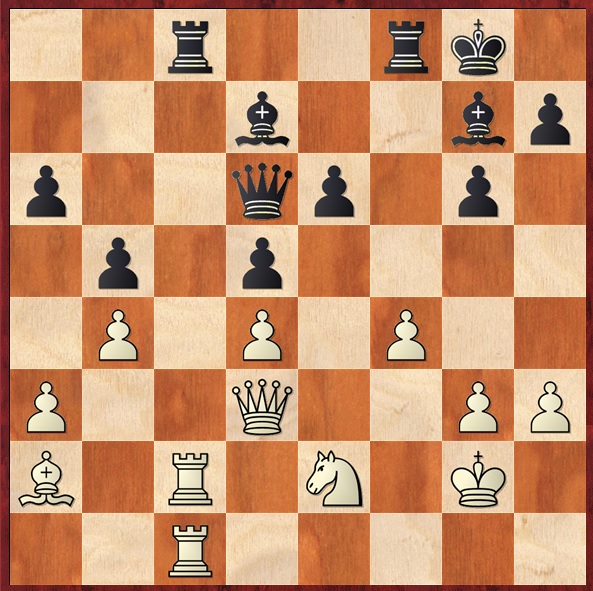 Here Rc5 is the best move, keeping control of the open file, and if Black captures with Rxc5 then dxc5 give White a protected passed pawn and a useful square on d4 for the knight.  Instead I played the planless Rc3 (I was very low on time), and my opponent played Rxc3, missing the chance to occupy his own outpost with Rc4!?  This is a more difficult move to make, as it sacrifices an exchange, but after Bxc4 dxc4 Black has great practical chances along the a8-h1 diagonal, as well as a protected passed pawn on c4.

Having completed this chapter, I hope I will make the right move automatically the next time I get a position like this.

I feel a bit fortunate to have dropped only four points, as I was tired and impatient and so rushed a bit on some of the exercises.