Hello all, and apologies for the lack of updates recently.  Please rest assured that the fact I have not been posting does not mean I have not been playing and studying; quite the contrary, in fact.

Despite gaining a few points at Frome, this period will see a rating loss (my first since December) due to a poor performance at the e2e4 Gatwick Open.  To date I have played in two e2e4 events, each of seven rounds, but did not manage to win a single game until the (combined) thirteenth round!  (This was not my first full point though, as I got a bye in the twelfth…)  A combination of factors, including tiredness, a dislike for the time control used (game in 90 minutes, plus 30 seconds increment) and just coincidence are probably to blame.

Of course, this rating loss comes at an unfortunate time, and the path to reaching 2100 by September now looks very difficult.  Having said that, I have enough games planned to make it possible, if I am able to perform at around 2200.  I have not managed to qualify for the British Championships, so will be playing in two Spanish events instead, as follows:

I have been studying with a renewed sense of urgency in recent weeks, though you would be forgiven for not guessing that from my study log.  I have been using an innovative method for recording my study, pictured below: 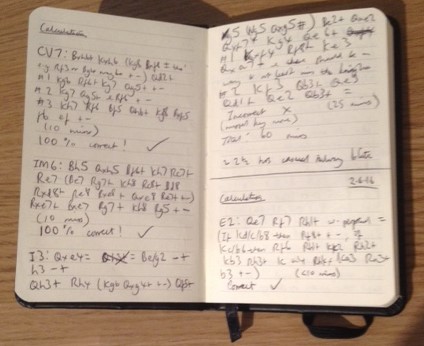 Yep, good old-fashioned pen and paper.  I have found I prefer writing notes by hand, and just the act of carrying this around with me helps with motivation.  At least I have the information recorded, and may get round to putting it online at some point.

One thing I have been working on with my coach, Tom Rendle, is my habits at the board.  I have been using a pre-game mental checklist for a while now, designed to remind me of and help me avoid some of my bad habits, which goes as follows:

1.  I will calculate short, sharp variations, and commit to conclusions.

2.  I will only continue to spend time when I think there is a reasonable chance my decision will be improved.

3.  I will not allow adverse events to affect my focus.

I have made decent improvement in these areas, and consider the next big area to be my concentration several hours into the game.  I have lost count of the points I have thrown away late in the game recently (including several at Gatwick).

If you have any bad (or good) habits at the board, I would be interested to hear about them in the comments section below (and how you try to combat them).