Hello and welcome to Road to Grandmaster.  This blog will document my journey as I attempt to improve from a ‘Class A’ chess player to a Grandmaster, the highest title awarded by FIDE (the World Chess Federation).  I propose to do this without failing my degree (an MSci Joint Honours in Physics and Chemistry), without dropping my other hobbies (guitar, Go, Mandarin Chinese and more), without losing my girlfriend (who has not the slightest interest in chess), and even whilst maintaining a normal student’s social life.  To further motivate myself I have wagered £200 with William Hill at odds of 25:1 on me becoming a Grandmaster, and so stand to win £5000 should I succeed.

My current English Chess Federation grade stands at 152.  That’s about 1866 FIDE according to the ECF’s conversion formula (ECF*8 + 650 = FIDE).  My grade last year was 162, or 1946 FIDE, so I think my level can safely be approximated to 1900 FIDE, though I have no official FIDE rating at present.  As many of you will know, one of the requirements for becoming a Grandmaster is achieving a rating of 2500, which means I must improve by about 600 ELO points.

That’s a lot, but such gains are routinely made quickly nowadays by talented youngsters.  Unfortunately, at 20 years old (21 in two weeks), I’m no longer really a youngster and might even be considered over the hill (for those who don’t know, the current world no. 1 is only 19)!  Below is a graph of my ECF grade since I first started playing competitively. 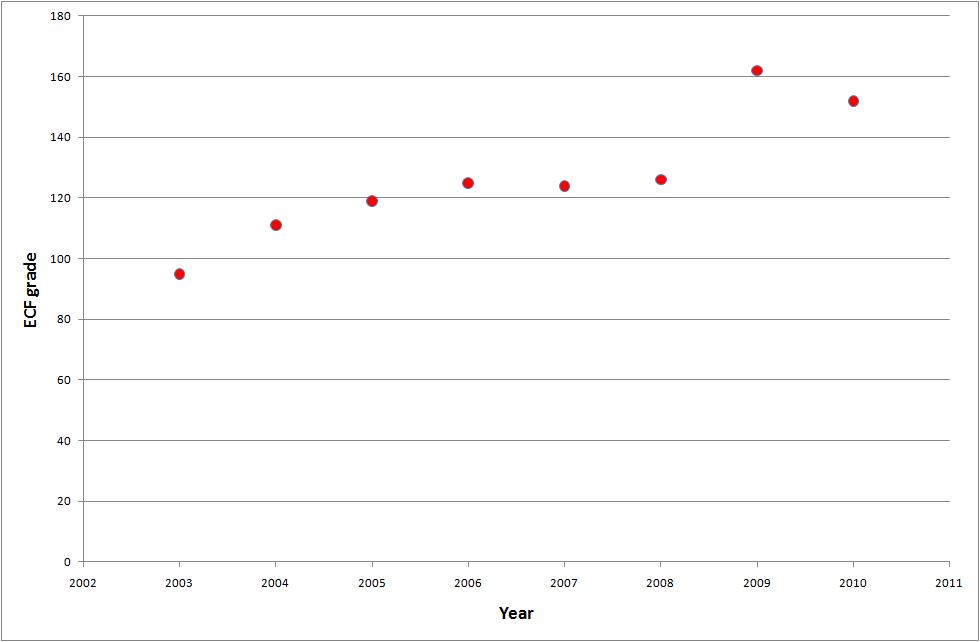 As you can see, I have generally made steady progress, though 2006-2008 was something of a plateau.  My grade jumped in 2009, but at least part of that was due to the ECF adjusting grades because it felt deflation had been occurring, and my grade has dropped a bit this year.  The Grandmaster level in terms of ECF grades is around 230.

Next is a graph of my grade, along with the grades of the top three British players of my year group (James Hanley, Peter Poobalasingam and Tom Pym), and the grade of David Howell, a prodigy in the year below me who is now a strong Grandmaster.

Let’s look first at David Howell’s line.  This is the typical child prodigy graph – he rockets up to begin with, and keeps on improving pretty rapidly up to 230, the Grandmaster point.  Of course improvement slows a bit the stronger he gets, but it still takes only 8 years from his first ever grade until he’s about Grandmaster strength.  The lines of Poobalasingam, Hanley and Pym follow a similar trajectory, though somewhat lower, but they all seem to reach a bit of a plateau around the 180-200 mark.  Whilst very strong, this is still a significant way from Grandmaster, and the last 30 points are the hardest to climb.  Many players reach this sort of level and remain there or thereabouts for most of their chess career.  Well done to Pete who appears to be making a push off this plateau with his latest grade.

My grade line is significantly lower again.  Clearly the child prodigy Grandmaster route is no longer open to me – nor have I reached the level of the other three, where GM is in sight and probably achievable with a few years’ hard work.  Given my other time commitments, a third route – slow and steady – would appear to be the only option.  Perhaps, by using my study time efficiently, I can make my line look more like the start of the others up to near the 200 mark, but from there I suspect it will be a slow grind.  For this reason, I don’t expect to reach my goal for ten years at the very least.

Finally, readers needn’t worry that this website will only be about ratings, improvement, or lack thereof.  I expect to write about everything that interests me in, and to an extent out of, the chess world.  It’s going to be a long road, and I hope that some of you will join me, at least some of the way.

37 thoughts on “Road to Grandmaster”